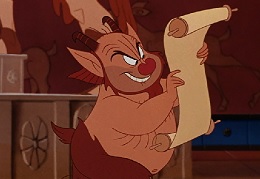 A hero isn't measured by the size of his strength, but by the strength of his heart.

So said Zeus to his son Hercules. Philoctetes, trainer of the greatest heroes of ancient Greece, had his own advice for the would-be hero in the form of his 101 patented Hero Rules, presented in their entirety courtesy of Whatsits Galore. Now you, too, can benefit from Phil's decades of experience as you go from zero to hero with this handy guide. Yes, indeed.

According to the book The Art of Hercules, written by Stephen Rebello and Jane Healey, there are no less than seven Disney in-jokes in Hercules. We have searched carefully for them, and the results are listed below:

1. Meg's line, "A couple of rodents looking for a theme park"
2. The Hercules Store mocks the Disney Store
3. Scar is seen as a lion skin
4. "It's a small Underworld after all"
5. The Muses' heads resemble the busts in the Haunted Mansion
6. There is a building in Thebes that looks like the Swan Hotel in Walt Disney World
7. ??

Does anybody know the last in-joke?